Peter launches the series of podcasts on philosophy in medieval Latin Christendom with a look ahead at what’s to come. 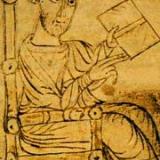 197. Charles in Charge: The Carolingian Renaissance

See the general bibliographies for medieval and early medieval philosophy.

The intro/outro music for the episodes on early medieval philosophy is a piece composed by Hildegard of Bingen. You can listen to the whole thing here.

Both very nice and highly appropriate music it is Peter. Have been much looking forward to this period concerning your podcasts. Thanks!

Congratulations on a fine introduction. I wonder if it makes sense to keep Augustine out of the chronology, insofar as his thought had practically no impact on ancient philosophy as such and an enormous, often defining influence on almost all Latin theology and philosophy of the Middle Ages. His world was still ancient, but his mind was medieval in that it was a major cause of the medieval. Besides it's helpful to speak of thousand year spreads of the medieval saga: biographically, from the birth of Aug. in mid-4th to the death of Ockham in mid-14th; politically, from the fall of Rome in the 5th to the fall of Constantinope in the 15th; in culture and religion, from the closing of the Athenian schools and the birth of the Benedictines in the early 6th to the humanism and Reformation of the early 16th. (Hardly tidy, but it has always seemed to help my students get a sense of how much we have forgotten.)

Well of course when I covered Augustine my goal was to understand Augustine, not his influence. Clearly his influence on the medievals is massive - second to none, along with Aristotle. But I think it is important to see him, and also Boethius, as late ancient figures. The context for understanding Augustine's own works is provided not by the inspiration he exerted later but by the sources he read: Latin and Greek fathers, and also Plotinus and Porphyry. So I think he did belong there where I put him but you'll notice I'll have to allude back to those episodes pretty often in the episodes to come on medieval thought!

Very fine introduction.
I suppose it is informative for many people, but for me it was a pleasure to listen.

I really use your podcasts practically, I am just investigating who wrote what about Plato's Atlantis in the Middle Ages. This question melts down to the question of usage of Plato's Timaeus (Calcidius!) and Platonism in the Middle Ages. In order to get the bigger picture around my very special question, your podcasts are simply perfect. Thank you!

Timaeus in the middle ages

In that case you will like some of the forthcoming episodes: there will be one on the school of Chartres (and, in fact, whether there was a school of Chartres), and another on concepts of nature and science in the early medieval period. Both will talk about the reception of the Timaeus a fair amount, I believe; I haven't written them yet.

It is very interesting how unavoidable seems to be therms like "dark/darkness", "superstition" and "dogmatic" when we speak about philosophy of the Middle Ages. I did not remember hearing such pejorative therms relative to that bunch of arabian and asian exotic, odd, superstitious and mystical ideas that you uploaded here, which have few or nothing to do with philosophy.

Yes, I agree - hence the very beginning of this opening episode precisely challenges this pejorative usage, and argues that it is at best simplistic to think of the medieval period as a "dark age."

I think maybe the biggest reason why we talk about the "dark ages" from like 500 to 800/1000 is due to the huge decrease in literacy that did in fact occur in Western Europe after fall of Western Roman Empire--and also involved a huge decrease philosophical speculation, and transmission of philosophical works. This is why there is such a gap in philosophy in this series between Boethius and the Carolingian period, and that doesn't really pick up to the level seen in civilizations east until maybe Anselm forward?

It's just a historical fact that during that period literacy the litearcy and economy in general cratered within Western Europe (including Italy even) to a much greater extent than occurred in the cultural zones of Byzantine, Arab/Muslim Mideast, India, or China. To cite the Yale open course lectures by Paul Freedmon: the standard standard of living plummeted quickly (imports and trade fell, quality of pottery and homes fell, massive population decrease and disappearance of most cities). I have a memory that he said there were only like < 300 books of literature remaining. All of which is why so much of Plato and Aristotle and many other works were lost, and why Ireland, which had been considered a literacy backwater, suddenly found itself among the most literate. While during this period of the late first millennium...decreases that occurred in in the Byzantine zone were more gradual and halting, and the Muslim world was engaging in a significant increase in literacy and interest in philosophy.

Not that other non-literacy-related advances weren't also happening in Western Europe (for instance, use and further development of the heavy carruca plow and the horse-collar). But if it's ok to talk about a Greek "dark ages" between the Mycenaean and the Archaic periods, I think it's ok to use the same terminology when describing the Early Middle Ages within Western Europe, as long as the appropriate context is given and it's not overly generalized like Edward Gibbon or a Monty Python sketch or whatever.

The cosmos (?) in the image that you used looks surprisingly like the Madelbrot set (I know, I know, it sounds anachronistic) - what's the story behind it?

Oh good point, I hadn't noticed that. It's a commonly reproduced image of Christ as creator, from a medieval manuscript, so I think it was made without knowledge of fractal theory!

The One Thousand and One Nights

I am super excited to listen to the forthcoming episodes on medieval philosophy. One of the things I'm most looking forward to is hearing what you have to say about the Divine Comedy. This immediately conjured to my mind The One Thousand and One Nights, which I was sad to immediately realize was not part of philosophy in the Arab world series, unless I accidentally skipped an episode.

I really want to hear what you would have to say about this text, especially since Scherezade and other women in those stories are active participants in their own destiny and that of others. I also found those stories resonated a lot with what you said in episode 192 about Islamic attitudes toward "the stronger sex."

Since I know that you don't go back to cover things you might have skipped, I was wondering if it could be an idea in the future to do as you did with the Book of Job and explore it through its later influence, perhaps on European orientalism and the translation of the text by Antoine Galland?

Thousand and One Nights

Thanks, that's a nice idea! I agree it would have been a good idea for an episode (maybe along with Umar Khayyam, who I also regret not covering). 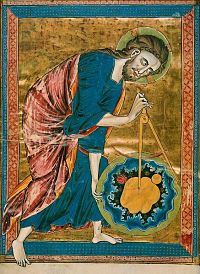