Pioneering thinkers Eudorus, Alcinous, and Numenius fuse Pythagoreanism with Platonism and pave the way for Plotinus. 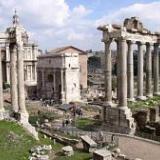 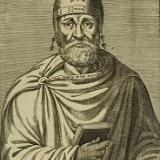 79 - To the Lighthouse: Philo of Alexandria

A couple of points

I have a question as regards Neo-Platonism. What is the best primary book to pick up as a first introduction? I have purchased Plotinus and tried hard to read through it but I have since found it slow going and a bit dry sometimes. It's nothing like Plato himself or the Hellenistic philosophers (Seneca, et al). So I do want to eventually read Plotinus but I wonder if you can recommend a primary text that would make Plotinus a bit easier, more enjoyable, to read.

On a slightly different note, I have been meaning to ask you if you could possibly elaborate in your podcats on the relationship between religion and philosophy. It seems that the connection between the two is quite persistent. We can see this from the pre-Socratic period all the way to the medieval period and beyond (all the way to the modern period in fact: one can think of Weil or Wittgenstein). By religion, I mean just that: whether it is Greek, Roman, or Egyptian religion, Judaism, Christianity, Islam or else other religious traditions of Europe, and the Near and Middle East. Not always this relationship was antagonistic: as in the time of Socrates let's say. Is it possible to say that philosophy (at least among some key figures, e.g., Socrates or Epictetus) developed as an intellectual response to popular religion in the Greek and Roman world? Is it plausible to claim that it was possibly the inadequacy of the Greek or Roman religious tradition that prompted some Greek or Roman philosophers (particularly in the earlier) to seek the intellectual or religious tradition in the Near East?

On a related note, I have always wondered why historians of classcial philosophy try very hard to present the rational tradition among the Greeks and Romans as somehow isloated from the intellectual and religious traditions of areas and regions that were clearly in contiunous contact with these two civilizations. I find it hard to believe that the entire Western philosophical tradition could have developed the way it has without any meaningful interactions with Egyptian and other Near Eastern religious tradtions -- be it Judaism or Mazdean/Zoroastrian tradition in Persia. In fact, the duality that you have just talked about bears an uncanny similarity to the Zoroastrian (not Manachean nor Gnostic) dualistic tradition which dates back to the time of Plato or even much earlier. To be sure, Greeks were familiar with Persian religion. We know this through Herodotus. It is for these resons that I wander if you could tell us a little about religion in general. I am eager to learn more about the Greek corpous around the figure Hermes Trismegistus.

Anyway, any thought on these would be greatly appreciated.

Thanks, I'm glad you enjoy the podcasts -- and I think you'll like the upcoming ones even better. I'll start getting into the philosophy-religion issue very soon, in fact next week with Philo of Alexandria; and the week after that is Plutarch, in that episode I will again have a lot to say about (in this case pagan) religion and its relation to his thought. Later on there will be a whole episode on the pagan-Christian dynamic and how it shaped ancient philosophy; the Gnostics will get in when I talk about Plotinus on matter. And I hope to cover the impact of the wider culture in other ways (I'm just now researching a later episode on rhetoric and ancient philosophy). So, stay tuned!

A good one-volume primary text collection for Neoplatonism is the reader from Hackett listed first in the bibliography on the top page on Late Antiquity here.

This podcast is another gem and I enjoy your exposition of the many facets of Middle Platonism that were unknown to me.

I have just a few points I hope you can clarity:
- Did Eudorus himself identify the One with the Good?
- Was Numenius, who inspired the gnostics, a dualist?
- What was it about Aristotle's Categories that so bothered the Middle Platonists?

Thanks again for an enlightening lecture.

Thanks, these questions are really key ones. I'll do my best:

1. I don't know that there is a fragment where Eudorus explicitly calls the One the Good. One could infer it from his ethical position, that we should seek likeness to God, plus his claim that the One is the highest God. The best testimony is in Simplicius (commentary on Physics 181) which says that he ranked two series of opposites, following Pythagorean tradition, and the goods are "ranked under the One." So the One is being seen as the source of goodness if not the Good itself; I guess the only thing to stop this identification would be if the One were thought to transcend goodness. But I'm being slightly pedantic, basically the answer is yes.

2. It is standard to say that there are dualist tendencies in Numenius, yes, because he has his principle of multiplicity, the Dyad, being to some extent causally independent of the One/Good. The question of who is influencing whom between him and the Gnostics is an interesting one; as I gather you know, the Gnostics are influenced by Platonism of this period for sure, but as we'll see in a couple of episodes dualism is already present in Plutarch. Numenius may only be latching onto dualist currents that had been going through Platonism for a while already.

3. We're not sure what bothered them about the Categories but an obvious guess is that Aristotle makes sensible particulars "primary substances" (ch.5) which flies in the face of Platonist metaphysics. But my hunch is that it was more important that the Categories was also emerging as a basic battleground between Aristotelians and other schools because both the Platonists and the Aristotelians wanted to lay claim to having the best logical and linguistic theory. I'll talk about this a bit in a few episodes when I get to the early Peripatetics.

Hope that helps a bit! 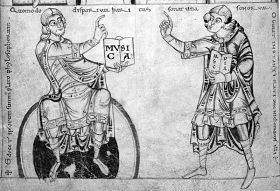