Philosophy in the Islamic World

In these episodes Peter examines the thought of Muslim, Jewish and Christian philosophers who lived in the Islamic world, and wrote in Arabic, Hebrew and Persian, from the 9th century down to modernity. Islamic theology (kalam) is also considered. Major figures covered include al-Kindi, al-Farabi, Avicenna, al-Ghazali, Averroes, Ibn 'Arabi, Suhrawardi, Fakhr al-Din al-Razi, and Mulla Sadra, but as always considerable attention is devoted to lesser-known figures and movements.

A book version of these podcasts is available from Oxford University Press.

For an introduction to this material see:

For general bibliography see the top page of each sub-menu:

And for abundant bibliography on Islamic philosophy see:

• T.-A. Druart, Medieval Islamic Philosophy and Theology: Bibliographical Guide (at the bottom of this page). 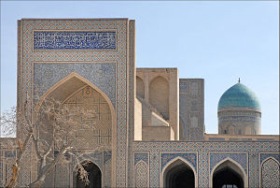